RT @ENGWaterPolo: The inspiring story of @LASWPC’s Duncan Holmes, who was recently awarded the Dave Warriner Memorial Trophy by the British…

Ferencvaros retained the Super Cup in a thrilling final against Marseille and clinched this trophy for the 4th time in its history. The French, playing on home soil, were set to cause a big upset as they led 8-4 at halftime but the Champions League title-holders staged an outstanding second half as they hit back with a 10-3 run, netting six goals in the last period. Ferencvaros is now second on the all-time rank behind 6-time winner Recco. 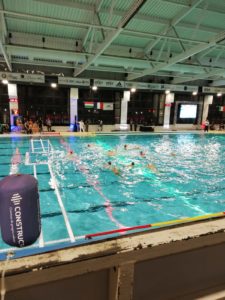 The teams needed five minutes to settle in the game but then found the back of the net two times apiece. The French opened the second period brilliantly, a nice counter, followed by a finely tuned man-up gave them a 2-4 lead and soon it turned out that this also boosted their belief that in the one game they could catch the Champions League winner (while their rivals started to see that this was going to be a different game than the one they had won 13-7 in the Champions League two weeks ago in Budapest).

While Ferencvaros wasted a series of 6 on 5s – two were gone without a shot in quick succession – and stood 1/6 at one stage, the French made most of their opportunities. Unlike their rivals, they buried their man-ups, Bogdan Durdic and Ante Vukicevic were both on target to build a massive 3-7 lead. Nikola Jaksic pulled one back from a nice shot from the distance but Alexandre Camarasa responded with a great goal from the centre to crown Marseille’s 2-6 run in the second period.

Ferencvaros needed to dig deep as they barely experienced to fall behind in the current season and not since last spring they trailed by four in any encounter. But champion teams could be recognised through their reactions in situations like this and the Hungarians kicked off the second half with a great surge. Gergo Zalanki blasted one from 7m, Denes Varga scored a one-on-one and soon Ioannis Fountoulis put away an extra while they also killed a man-down. Within two minutes they were back (7-8) but Marseille managed to halt their run as Durdic netted his third from a 6 on 5 after a time-out.

As a contrast, the Magyars couldn’t make theirs (also after a time-out) but at least their defence denied the French in the next man-down too. That was crucial as Aaron Younger sent the bell home from a man-up just 6 seconds before the last break so it stood 8-9.

And then came Denes Varga and his magic: got a pass on 3m while standing with his back towards the net but caught the ball from the air and sent it in a

backhanded one-timer and FTC was back to even at 9-9. Marseille got a 6 on 4 and Igor Kovacevic took the second chance after a rebound but the Magyars found Nicolas Constantin-Bicari on the 2m line in their man-up for 10-10. And with 5:03 to go, the champions were ahead for the first time after a well-defended man-down and Younger’s nicely executed 6 on 5.

What put Marseille ahead earlier, began to melt down as the blocks denied them in their following man-up again – on the other end Fountoulis netted his third from an extra and soon it was three between as the Magyars forced a penalty in a five on five situation and Fountoulis was merciless (10-13). Marseille would have needed a miracle but they could only hit the bar from their next extra and that was the end of the story, which looked like a fairy tale for a while.

Fountoulis’ 5th goal – stylishly from a man-up (these mirror the differences between the first and second half: FTC was 2 for 8 and 7 for 8 – Marseille: 3 for 5 and 2 for 7) – sealed Ferencvaros’ triumph. In fact a year ago the Greek played in the losing side of the Super Cup final, Olympiacos, now he was the man of the match among the winners.

Thus Ferencvaros retained the Super Cup – the first team to do so since Recco’s double in 2007 and 2008. This was the 4th victory for the Magyars and now they are second behind 6-time winner Recco in the all-time rank.

“It was an exciting match, perhaps more exciting than it should have been. Though we were aware that Marseille has two faces and could play way better in its home pool, we couldn’t handle that at the beginning. I understand that as we beat them quite easily two weeks ago in the Champions League in Budapest. In this situation you try to get ready but it’s hard to influence your deepest thoughts. But in the second half we played our A game – we also have these two faces in the current season so far, having highs and lows within a game though before we usually had a better start followed by a setback. That’s why I’m happy to come back so brilliantly. This game serves our goals for sure as we have to see we have loads of work ahead of us – though at this part of the season this is quite normal.”

“We wanted to show that this was going to be a totally different game than the one two weeks ago. We began hard, with good speed and perhaps with surprised them with this good start and the first half was beyond everyone’s expectations. But Ferencvaros is such a great team and they could respond really well. We might become less confident, we couldn’t chance our tactics in time, both in man-ups and in man-downs but we need to analyse the video what went wrong in the second half.”

“Again, it turned out that there are no favourites and no underdogs in one-game finals. We knew exactly that Marseille plays differently at home but we could not react on this at the beginning, they played well, aggressively and with precision. But we showed again that our team has a winning mentality. There is no situation which we cannot handle well. I’m really happy that we proved that in such a game and won the trophy thanks to this mentality.”

“Though we were determined, we couldn’t enter the match as it would have been required here. Maybe they stunned us a bit with this great first half. What changed for the next half? Well, we came back a lot more aggressively and not only in defence but in offence too. In every single move we made them feel that this was now a totally different game. And this kind of change can have its effect in such a match between such teams. Another factor might be that when you are the underdog you can kick off the game in this ‘nothing-to-lose’ style but if you go ahead then comes the next challenge, to keep your lead and to finish off the match. And this can be tough, especially when the stronger side starts playing quite differently and also more successfully. I think this was the big contrast between the two halves.”

For stats and play-by-play description visit the following link: http://len.microplustiming.com/lensupercup2019/indexCL_web.php?c=ASX&g=1&t=A81&gr=1&s1=FTC&s2=MAR&st=2