A momentary lapse in the game… Notice how we label everything!
@londonwaterpolo

RT @cvlifenews: Come along this weekend and watch @ENGWaterPolo Senior Men's Home International at The Alan Higgs Centre on Saturday 28th a…

WP 21.1 It shall be an ordinary foul to commit any of the following offences (WP 21.2 to WP 21.17), which shall be punished by awarding of a free throw to the opposing team.

[NOTE: The referees must award ordinary fouls in accordance with the Rules to enable the attacking team to develop an advantage situation. However, the referees must have regard to the special circumstance of WP 7.3 (Advantage).]

WP 21.2 To advance beyond the goal line at the start of a period, before the referee has given the signal to start. The free throw shall be taken from the location of the ball or, if the ball has not been released into the field of play, from the half distance line.

WP 21.3 To assist a player at the start of a period or at any other time during the game.

WP 21.6 To take or hold the entire ball under the water when tackled. 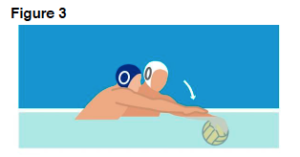 WP 21.7 To strike at the ball with a clenched fist. This Rule shall not apply to the goalkeeper while within the goalkeeper’s 6 metre area.

WP 21.8 To play or touch the ball with two hands at the same time. This Rule shall not apply to the goalkeeper while within the goalkeeper’s 6 metre area.

WP 21.9 To push or push off from an opponent who is not holding the ball.

[NOTE: Pushing can take place in various forms, including with the hand (figure 4) or with the foot (figure 5). In the cases illustrated, the punishment is a free throw for an ordinary foul. However, referees must take care to differentiate between pushing with the foot and kicking – which then becomes an exclusion foul or even brutality. If the foot is already in contact with the opponent when the movement begins, this will usually be pushing, but if the movement begins before such contact with the opponent is made, then this should generally be regarded as kicking.]

[NOTE: If the player receiving the pass does not shoot at goal, the player who passed the ball must immediately leave the 2 metre area to avoid being penalised under this Rule.]

WP 21.11 To take a penalty throw other than in the prescribed manner.

WP 21.14 For a team to retain possession of the ball for more than:

(ii) 20 seconds in the case of an exclusion, corner throw or rebound to the attacking team after a shot, including after a penalty shot,

without shooting at the opponent’s goal.

The timekeeper recording the possession time shall reset the clock:

(b) when the ball comes into the possession of the defending team, the clock shall be reset to 30 seconds. “Possession” shall not include the ball merely being touched in flight by an opposing player;

(c) when the ball is put into play following the award of an exclusion foul to the defending player, the clock shall be reset to 20 seconds unless there are more than 20 seconds of possession time remaining, in which case the time shall continue and not be reset;

(d) when the ball is put into play following the taking of a penalty throw without a change of possession or, corner throw, the clock shall be reset to 20 seconds;

(e) when the ball is put into play following the award of a penalty throw with a change of possession, a goal throw or neutral throw, the clock shall be reset to 30 seconds.

Visible clocks shall show the time in a descending manner (that is, showing the possession time remaining).

[NOTE: The timekeeper and referees must decide whether there was a shot on goal or not but the referees have the final decision.]

[NOTE: It is always permissible for a referee to award an ordinary foul under this Rule before the applicable possession period has elapsed.

In the last minute of the game, the referees must be certain that there is intentional wasting time before applying this Rule.]

[NOTE: Simulation means an action taken by a player with the apparent intent of causing a referee to award a foul incorrectly against an opposing player. A referee may issue a yellow card against a team for repeated simulation and may apply WP 22.13 (persistent fouling) to sanction offending players.]