Enfield Water Polo Club’s Charlie Briers has been named in the Great Britain under-17 squad which will compete in next month’s European Games qualifiers in Malta.

Charlie was selected for the final 13 by coach Craig Figes and will head out to the Mediterranean isle to face Germany, Malta, Switzerland and Latvia in a tournament to be held at the outdoor KMS Tal-Qroqq Sports Complex pool near Valletta. 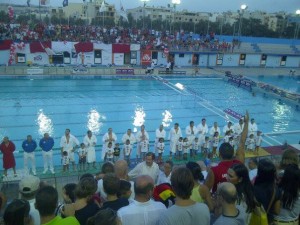 The Tal-Qroqq Swimming Pool in Malta

The GB boys will be aiming to finish in the top two, which will be enough to secure a place in this summer’s European Games in Baku, Azerbaijan.

A final Team GB training session has been arranged for next weekend in Manchester for the boys to fine tune their preparations before flying out to Malta.

The qualifiers will take place 12-15 March:

Group D
(to be played in Malta)

The teams that finish first and second in each group will join the eight (Montenegro, Serbia, Italy, Hungary, Croatia, Russia, Spain & Azerbaijan as hosts) countries who have already qualified for the Baku 2015 Games, which will be held 12-28 June.

There are three other qualifying tournaments taking place the same weekend in March.

Group A
(to be played in the Netherlands)

Group B
(to be played in Austria)

Group C
(to be played in Poland)

Best of luck to Charlie and the rest of the Great Britain under 17 water polo team heading out to Malta!