A remarkable season saw Enfield’s senior men win all but one game during an impressive summer campaign. 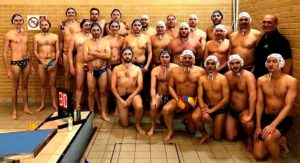 Coach Aloka Prelis and his squad are already looking forward to playing in Division One and the hard work starts now.

There is also a chance Enfield 1sts will finish the season on an even bigger high, as they are currently preparing for the Referees Cup London Water Polo League Final.

Well done to both squads!