Great Britain’s Under-17 Girls finished off their European Games Qualifiers in style on Sunday morning with a professional and commanding 30-0 (5-0, 4-0, 11-0, 10-0) victory over Switzerland.

The win in Nice, France, was enough to lift GB into the second qualifying place in Group A and puts them above the Czech Republic on goal difference.

Now the squad, coaches and GB fans inside the arena will be supporting France in the final game of the tournament.

A win for the hosts against the Czech Republic and the girls are heading to Baku, Azerbaijan, for this summer’s inaugural European Games.

The GB girls line-up for the Switzerland game

In the opening quarter against Switzerland, GB were determined to get off to a flying start and five counter-attacking goals put the game firmly in their control.

The second period was a similar affair, with GB defending firmly and then breaking in numbers as they besieged the Swiss net.

Four more goals ended any Swiss resistance and with the score 9-0 at half-time, GB were firmly back in Group A’s top-two qualifying places. 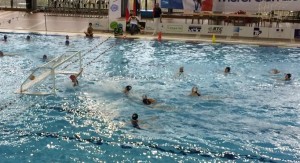 A rampant third quarter saw the GB girls show no mercy and a constant onslaught resulted in 11 unanswered goals to make it 20-0 at the end of the third.

The fourth quarter saw GB continue to dominate and there were jubilant scenes in the crowd as the Swiss were powerless to stop 10 further goals as the game ended 30-0. 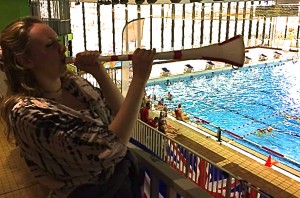 There was a party atmosphere in the stands 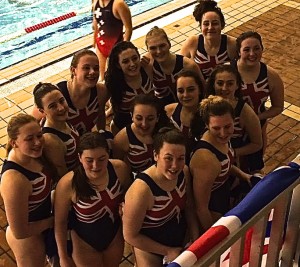