The result means France top Group A with six points and GB will need to beat Switzerland on Sunday (8am UK time) and hope results go their way elsewhere.

France still have to play the Czech Republic, who are also vying for a top-two finish, so there’s a chance it could come down to goal difference – if the French win all their remaining games. 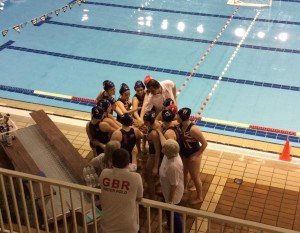 In tonight’s opening quarter against France the honours were even as it ended 2-2.

GB worked hard in the second and scored twice, but the home side seemed buoyant and found the target four times to edge in front 6-4 at half-time.

Spurred on by the lively GB support, the girls responded by winning the third quarter 3-2 to make it a one-goal game at 8-7 going into the final period.

That good work continued in the fourth as GB soon levelled to make it 8-8, but back came the French with two quick goals to make it 10-8.

There was still time for six more goals, but it was France who came out on top, winning a very tight game 13-12.

Team GB presented to the crowd